“A vote for these candidates is a vote for social, racial, and economic justice,” said Jacob Feinspan, Executive Director of the JUFJ Campaign Fund, “and a vote for a community, and a society, where the dignity of each person is sacred. Voters have a clear choice in November. Larry Hogan vetoed paid sick leave for 700,000 Marylanders, tried to block environmental protections for our water, and pushed for laws that would increase mass incarceration, especially of poor Black and brown people. Ben Jealous and Susie Turnbull will fight to raise the minimum wage, to provide healthcare for all Marylanders, and to create more safe and affordable housing. Our Jewish community believes Maryland should be a place where all of us can thrive, no matter what we look like or where we come from. These leaders share that vision and will lead the fight to make it a reality.”

The JUFJ Campaign Fund launched in DC in 2014 to give the progressive Jewish community and its allies a new way to support aligned candidates and hold elected officials accountable; it was the first grassroots Jewish organization in the country to endorse candidates for local office. This is the first election cycle in which the Campaign Fund is issuing endorsements in any Maryland race.

“I am inspired that the Jews United for Justice Campaign Fund has joined our grassroots movement for change here in Maryland,” said Ben Jealous, candidate for Governor. “The values that inspire the JUFJ Campaign Fund’s advocacy are the same values that motivated me to become a civil rights organizer and, ultimately, run for governor. I look forward to standing with the JUFJ Campaign Fund to end mass incarceration, make higher education affordable, and fully fund our schools.”

“I am honored that the JUFJ Campaign Fund has endorsed our campaign,” said Susie Turnbull, candidate for Lieutenant Governor. “Ben and I initially bonded over our shared background as social justice organizers — and it’s these values of justice and equality that the JUFJ Campaign Fund works every day to advance. As a leader in the Jewish community, I am personally grateful for this transformative work. As governor and lieutenant governor, you can count on us to always be guided by the call to action that hangs in the JUFJ Campaign Fund’s office: “justice, justice thou shalt pursue.”

“I’m honored to have the support of the JUFJ Campaign Fund in our campaign to build a better Baltimore County,” said Johnny Olszewski, candidate for Baltimore County Executive. “Together we will continue to advocate for a more responsive, open, and equitable government that will expand opportunity in every community.”

“I am honored to receive the JUFJ Campaign Fund’s endorsement – they’ve been a real partner in pushing for policies that advance economic and social justice,” said Marc Elrich, candidate for Montgomery County Executive. “I would look forward to working with them as County Executive on expanding early childhood education, implementing a racial equity lens, and other initiatives that will make Montgomery County even stronger.”

“We are really excited about these candidates,” said Laura Wallace, JUFJ Campaign Fund Senior Organizer for Montgomery County. “Our grassroots team is proud to endorse a slate who share our Jewish values. These leaders have decades of experience working together with regular people and community organizations for lasting change. Our Jewish community is proud of the work we’ve done with Marc Elrich in Montgomery County to raise wages, strengthen the social safety net, and stand with immigrant families. Electing progressives across the state would make it possible for our elected leaders to form a strong team that can take bold action to end the very real racial and economic inequities that we face in Montgomery County and across Maryland.”

The Jews United for Justice Campaign Fund mobilizes the Jewish community of the Washington-Baltimore region to advance campaigns for social, racial, and economic justice and support progressive candidates for local office. 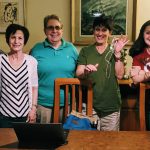 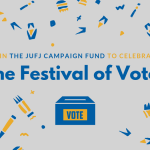