For DC, for Maryland, and for the JUFJ Campaign Fund, there were amazing, inspiring victories — and a few devastating and infuriating losses. Now that the dust is starting to settle, I wanted to share a few reflections with you.

JUFJ Campaign Fund volunteers and staff reached thousands of voters in DC and thousands more in Maryland. We knocked on doors, we passed out literature at Metro stations and polling places, we made phone calls, we distributed voter guides — we made sure that progressive, Jewish voices were part of the conversation in these elections.

Our endorsed candidates won four seats on the DC Council, four on the Montgomery County Council, and four on the DC State Board of Education. Both of our endorsed Attorneys General won re-election. Both of our endorsed County Executive candidates, in Montgomery and Baltimore Counties, won their races. All five of the ballot measures we endorsed across Maryland and in Baltimore City won. These victories, some of them very hard fought, show what we can do when we truly think Jewishly and vote locally.

Some of our candidates didn’t win last night. That’s always hard to take, but it doesn’t mean that they didn’t fight hard and change the conversation in our region.

Because Ben Jealous and Susie Turnbull showed what a progressive vision for Maryland looks like, Democrats are ready to make real change in Annapolis and across the state in 2019. The General Assembly will be more progressive this year than it has been for a very long time.

The DC State Board of Education will have two new progressive voices in Emily Gasoi and Zach Parker, joining Ruth Wattenberg and Markus Batchelor. We are sad to lose Joe Weedon’s leadership on behalf of students, parents, and teachers, but we are looking forward to next month’s special election for the Ward 4 seat — stay tuned for our endorsement! (UPDATE: Mazel Tov to our newest progressive champion on the State Board of Education, Ward 4’s Frazier O’Leary!)

Thanks for your blood, sweat, and tears — and your votes. Let’s keep on building this world with love. 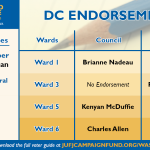 Resistance is Local: If I am not for myself, who will be for me?Washington, DC